Today was my favorite storytime experience of all the storytimes I've ever done.  No joke.  Mostly because the kids were so awesome!  They laughed and giggled right on cue, enthusiastically  participated, didn't interrupt once, no tantrums....it was literally the perfect storytime.

The Cow Loves Cookies by Karma Wilson.  While the other animals on the farm enjoy their regular foods, the cow chooses the one thing she likes best! 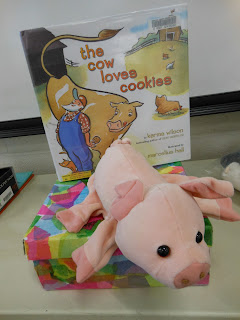 Is Everyone Ready for Fun? by Jan Thomas.  Jan Thomas does it again!!  Cows jump, dance, and wiggle on Chicken's sofa.

This books screams for interaction, but sometimes the kids get so focused on jumping and moving they miss why a book is funny, so I made each child a laminated "stick puppet".  They helped the cows plop down, jump, dance, wiggle, and finally take a nap. 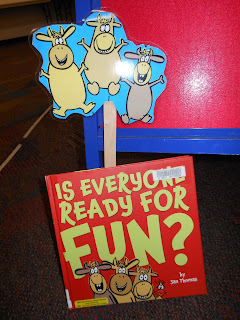 My chicken puppet helped act out the chicken's lines.


Cowlick! by Christin Ditchfield.  I did not read this book because I had to request it from a different branch and it was sitting on my desk after storytime.  You will giggle and "awww" at this book! 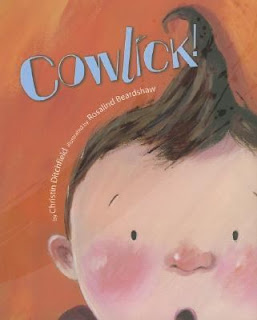 If you don't know why kids wake up with cowlicks: 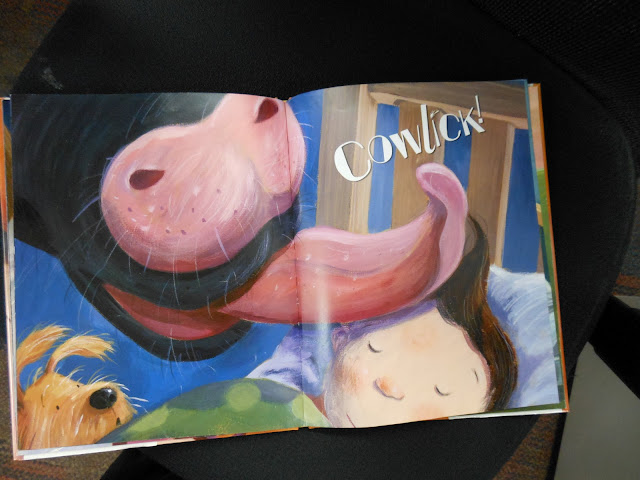 Cows give us milk to drink.  What foods are made from milk? 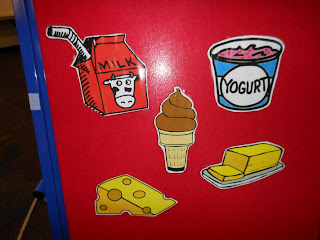 The best part was using this rhyme as a kind of mad libs.  We did it two more times but I let the kids pick what the cows would eat and drink and how we would convince the last cow to play 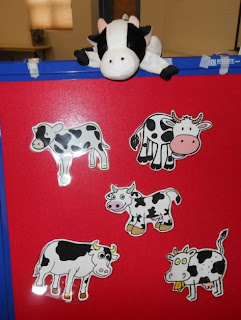 Music:  Our song was totally unrelated to cows, but one I've wanted to use for a while.  I handed out stuffed mice and we did "The Mouse Trap Dance".

Letter of the Day:  Gg for guitar
One of our awesome teen volunteers who's been helping me in storytime learned some kids' songs on his guitar and played for us today.  The kids got a huge kick out of it and he rocked it!

Did I already say today was a good day??!

Some people manage to grow gardens in Arizona.  I am not one of them.  I may as well read about them  =)

My Garden by Kevin Henkes. After helping her mother take care of their garden, a young girl imagines her dream garden. 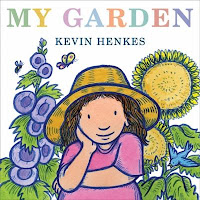 She plants jellybeans and a jellybean bush grows 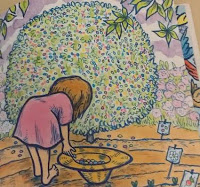 I made this flannel tree (about 2 feet tall) for Caps for Sale but have used it for multiple flannel activities.  There are white pieces of Velcro on the foam board to stick flannel pieces on.  I used flannel jellybeans that are all white on one side and various colors on the other side.

All the jellybeans started out white and I tapped my head while saying, "Think, think, think, I wish this jellybean was pink," and it magically turned pink!  We decided to come up with other rhymes to turn the other jellybeans colors. 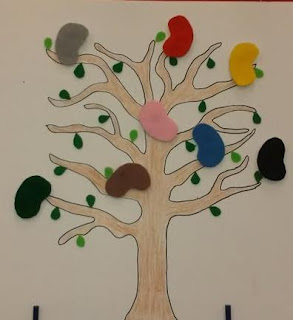 The book ended with fireflies so I pulled out my newest Folkmanis puppet Sparky, turned off the lights, and her glow and then did this fingerplay: 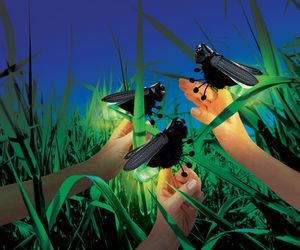 Up, Down, and Around by Katherine Ayres. A garden produces a variety of edible plants such as corn that grows up, onions that grow down, and tomato vines that twine all around.

We stood up every time we read the word "up", sat down when we read "down", and turned around when we read "around".  We moved A LOT. 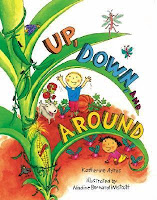 Over in the Garden by Jennifer Ward
Growing Vegetable Soup by Loise Ehlert
Flower Garden by Eve Bunting
Nibbles: A Green Tale by Charlotte Middleton﻿
﻿
Music:  "Tooty Ta" by Dr. Jean.﻿  I have mixed feelings about this song, but do it every now and again because lots of kids like it.

Letter of the Day:  Ff for fox, firefly, fish, and frog 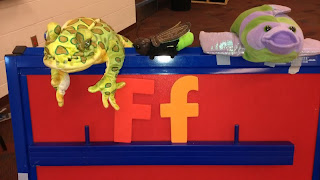 Can you think of any Red vegetables? Green? Yellow? Orange?  This game gets a little crazy because the kids all start shouting veggies at me and I really can't hear at one point.  There's probably a better way to to it.....
They always think of veggies I don't have so I have to make more.  Cucumber, zucchini, cabbage, spinach, radish. 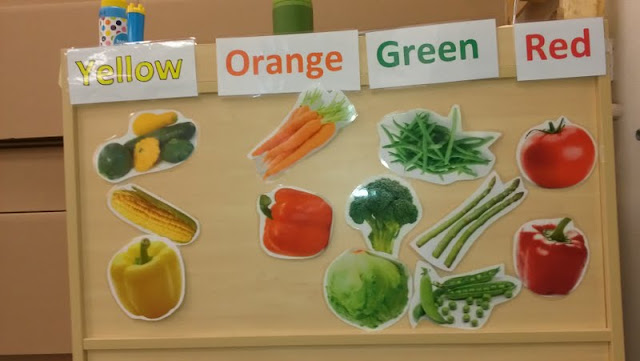 Tara Miss Tara at 11:16 AM No comments: Links to this post

What book do I belong to?

Leave a comment if you think you know what book this set goes with.  There's a monkey, tiger, snake, bee frog, fish, two flying birds, and some foliage.  Thanks!
Tara Miss Tara at 10:08 AM 3 comments: Links to this post

We had the joy of presenting one last desert-themed storytime for K-2nd graders as our Summer Reading Program is winding down.

After signing in, each child picked a bandanna to sit on during the program.  To break the ice (smaller groups tend to be shy at first) we sang two songs. 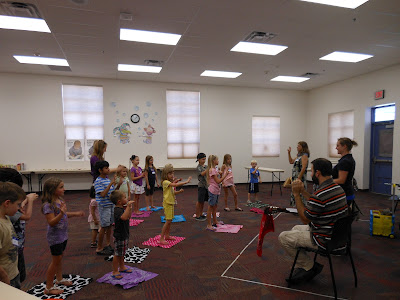 Lady swimming (swimming motions)
Uh oh! Lady lost her suit (strategically cover up)
Lady  looking for her suit (hand over eyes, looking around)
Lady found her suit (shimmy back into it)

Lady swimming! (faster than before)
Back stroke!
Doggy paddle!

Book:  Are You a Horse? by Andy Rash.  Roy receives a saddle for a birthday present and goes in search of a horse.  Lesley used a make-shift puppet stage to give voices (very funny!) to the eight puppets who helped bring this book to life. 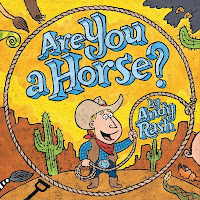 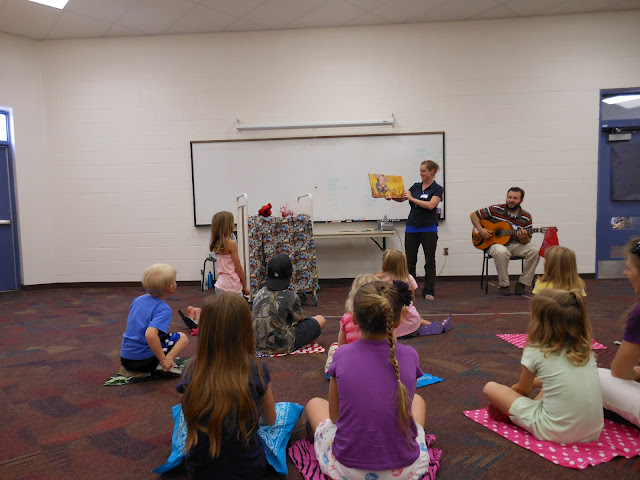 ﻿State Symbol Game:  Each child got a picture of one of the state symbols.  They would stand up if they thought they had the "state reptile" or "state flower" etc. when I called it out and tried to identify what it actually is. 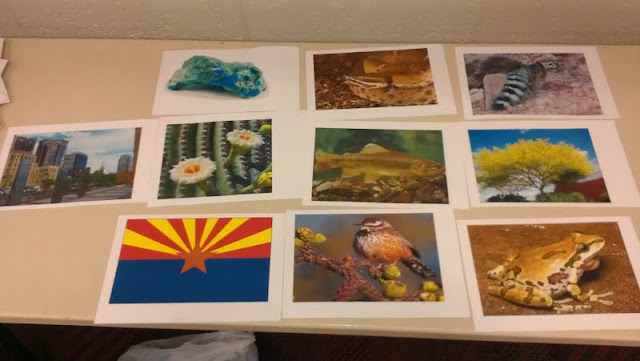 Book: The Seed and the Giant Saguaro by Jennifer Ward. A pack rat, carrying fruit from the giant saguaro, is chased by various desert animals and inadvertantly helps spread the cactus seeds. 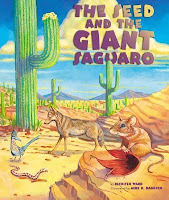 I made some props to go with this book, so several children got a prop or puppet to bring up when we got to that part in the story. Our special guest (the unveiled "Mr. T":  Tony) spritzed everyone when it started to rain in the book. 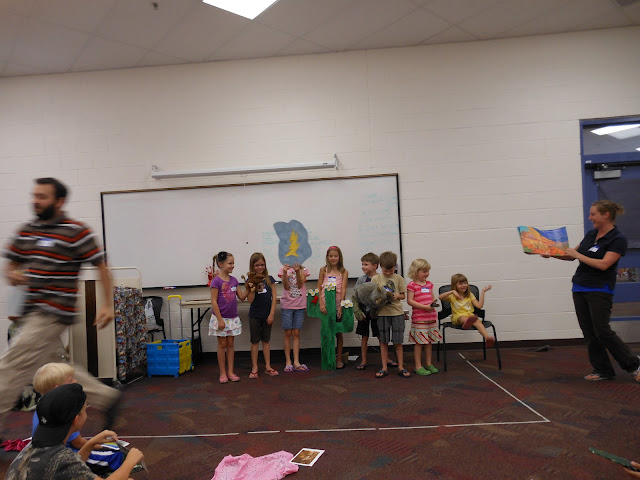 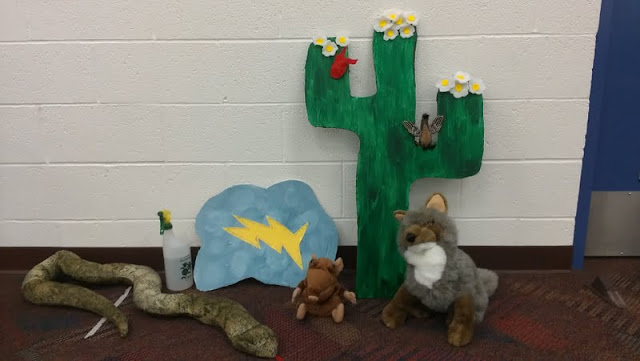 The red fruit is sticking to the cactus with Velcro and has little pom pom seeds tucked inside.

Music:  We did "The Beanie Bag Dance" by Greg&Steve using cactus shaped beanbags our teen volunteers cut, stuffed, and glued for this program.  The kids got really creative and got me giggling! 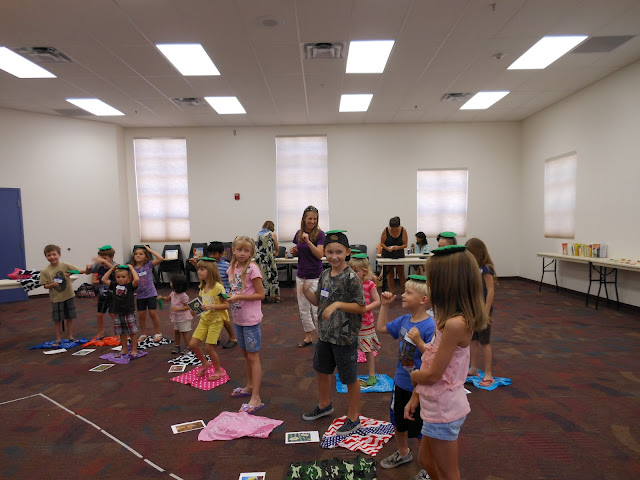 Craft:
The children used tacky glue to add flowers and cactus seeds to their beanbags. 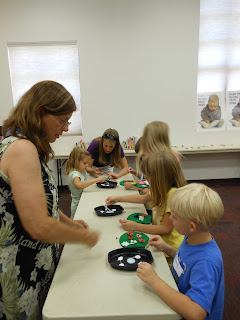 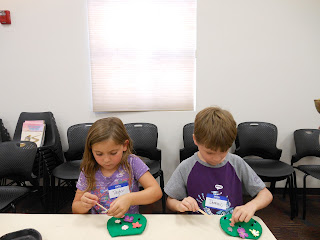 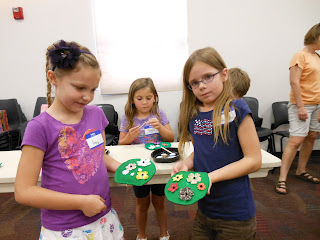 Campfire Sing Along:
(Pretty much the best part!  Thank you, Tony!)

Tony visited us from Admin to play some﻿ songs he learned just for this program and he ROCKED IT.  We sat around our "campfire" eating baggies of teddy grahams, chocolate chips, and marshmallows (our version of s'mores) and sang along to "Camptown Races", "On Top of Spaghetti", and "Oh Susanna". 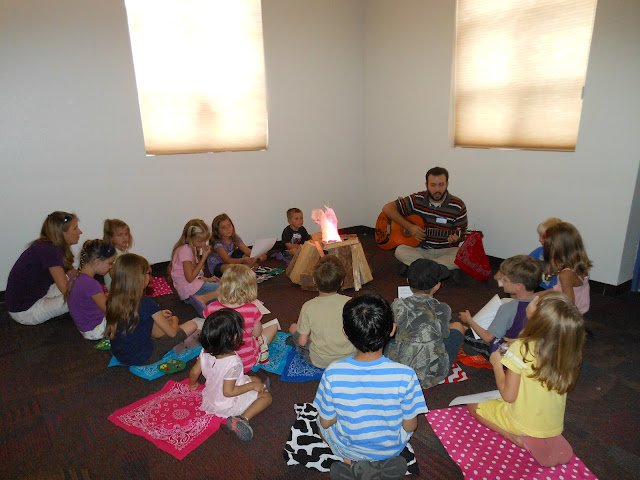 Lesley, for co-presenting
Tony, for dazzling us with your guitar and voice
Janet, for taking pictures
Tara Miss Tara at 3:00 PM No comments: Links to this post

What a crazy busy day!  Babytime and a school-age program, but it sure was fun!

We had just about 50 babies today and 51 adults.


Mr. Bear was rocking an American flag bandanna during the song we open with every week ("Mr. Bear")

Puppet Animal Song:  "Old MacDonald". Who can resist the tickle bug at the end?!

Mr. Bullfrog (my baby was able to join us today and this is his FAVORITE!!)
This is Mr. Bullfrog (fist)
He's sitting on a rock (place on top of other hand)
He jumps into the water (lift fist up, anticipation building......)
KERPLOP! (clap)

Jack is Quiet - every week

Prop Rhyme:
I'm not positive how appropriate this is for baby time since most babies don't drink cow's milk or know what honey is since it's a no-no food until they're a year, but I saw it on Baby Einstein (shhh my baby watches it sometimes) and I think it's really cute

Repeat with: Cow (or mommy) makes the milk, Chicken makes the egg, and Sheep makes the wool

"I Wake Up my Hands" - every week
"Itsy Bitsy Spider" - my favorite version!

Charlie Chick - such a fun pop up book!

Activity:  Shakers with the song "Rockin' Robin"  (That's my little boy and his friend Makenzie)


We always end with bubbles!!
Tara Miss Tara at 4:54 PM No comments: Links to this post